Are you ready for a night of laughter like no other?

This shows promises to be one of the funniest lineups you'll see in Austin, TX. And to make it even better, it's all going down at the legendary Stubbs Amphitheater. You won't to miss this show.

Grab your tickets now. Tickets are sold in groups of 2. You can pick your seats. The sooner you get them, the better the seats you will get. All tickets are $65.

Get them now before you are left wishing you did.

More info on the show and the lineup below.

Trevor Keveloh, Comedian and CoFounder of The Dojo of Comedy LA, has created a new vibe known as "Korrupted Comedy." This is dedicated to the Austin comedy and artist scene and has been making waves since its debut January of 2021...

And with that we present you with....
"Hired Guns"

21 and Up. No recordings of any type. NO heckling. Complete parties only.
Comedians Info

Tony Hinchcliffe is a touring stand up comedian based out of Austin. Tony is also the host of the popular live podcast Kill Tony which also travels internationally as well as being based out of The Comedy Store in L.A.

In 2020, he began hosting an online course on “Roasting” called RoastMaster Class, drawing from his over decade long knowledge of writing for 8 Comedy Central Roasts and performing on roasts and roast battles, both educational and entertaining, the “RoastMaster Class” started as just a parody video and then became a real project that he began to enjoy doing, thus he released it upon the debut of his Patreon.

Tony also tours internationally with Joe Rogan and can be seen frequently on the JRE the most popular podcast in the world. Tony is a regular at every major club in LA and headlines regularly at every major club as well as some of the finest theaters in America, Australia, and Europe.

Bret Ernst: Most recently notable for his character Louie LaRusso Jr on the Netflix show "Cobra Kai" He has been written up in trade magazines such as THE HOLLYWOOD REPORTER and VARIETY, and mentioned in national magazines like MAXIM, ENTERTAINMENT WEEKLY, and ROLLING STONE.

His COMEDY CENTRAL PRESENTS was voted one of the Top 5 specials of 2011 by Comedy Central viewers, and his comedy album “AMERICAN COMIC” broke the top 10 on ITUNES the first week of its release in 2012. He has made celebrity appearances on CHELSEA LATELY, ABC’s COMICS UNLEASHED, the TOP TEN on E! and THE SPORTS LIST on FOX.

Bret first gained national notoriety starring in the feature film VINCE VAUGHN’S WILD WEST COMEDY SHOW. This documented Ernst, Vaughn & three other comedians as they performed in a 30 night-30 venue tour across America. More recent credits include a series regular on TRU TV’s HOW TO BE A GROWN UP, and in March 2016, Ernst appeared on Ari Shaffer’s THIS IS NOT HAPPENING on Comedy Central.

Jonathan Kite: Most recently known for his work on the hit Netflix sitcom "Dad Stop Embarrassing Me." Kite co-starred on the CBS sitcom 2 Broke Girls, playing the role of Oleg Golishevsky, the creepy Ukrainian cook who works at the diner.

Other television work includes guest roles on Raising Hope, Kickin' It, American Dad!, The Life & Times of Tim, In the Flow with Affion Crockett, and Wizards of Waverly Place. In addition, he also appeared in several commercials such as spots for AT&T and Muscle Milk.

Outside of acting, Kite and his former 2 Broke Girls co-star Matthew Moy appeared on Hell's Kitchen when they attended dinner service in the Season 17 episode "Stars Heating Up Hell".Kite voices two characters in the animated show Cleopatra in Space: Octavian and Trumpet Guy.

Ian Edwards has appeared on Conan 4 times, and can be seen on Comedy Central’s New Negroes. He played Skull on several episodes of season 2 of Friends From College, was a regular cast member on season 6 of MTV’s hit show Punk’d, was a writer on shows such as SNL, Cartoon Network’s The Boondocks and MTV’s The Lyricist Lounge, and performed as a stand-up on shows such as HBO’s Bad Boys of Comedy, Showtime’s Live Nude Comedy and the Comedy Death Ray Album.

Furthermore, Ian’s podcast Soccer Comics is housed on the All Things Comedy Network, partnered with Laughspin.com. In addition, Ian has been invited to perform at some of the more prestigious festivals such as Montreal Just For Laughs Comedy Festival, HBO’s Aspen Comedy and Arts Festival, Edinburgh, Bridgetown, San Francisco Sketchfest, Moontower Comedy Festival in Austin and Jeff Garlin and Michael Moore’s festival, Traverse City Winter Comedy Arts Festival. Ian has also had jokes featured in The New York Post and Time Out Los Angeles last year.

Brian Holtzman often-perplexed scenarios of everyday life, intertwined with his own neurotic behavior, are not to be missed by any serious aficionado of comedy. Since relocating to Los Angeles, Holtzman has added "actor" to his resume, having appeared on My Wife and Kids, Mind of Mencia, Minding the Store, and in movies like Pauly Shore Is Dead, Sheep Man, Foolish, and Looking for Lenny.

Holtzman’s stand-up was featured on National Lampoon Live: New Faces-Down and Dirty, which is available on DVD. He is the host of the podcast "Dead Air" which is produced by Brian Redban.

Holtzman is currently living in Austin, TX and has taken the scene by storm as becoming the hottest comedian new to Austin. 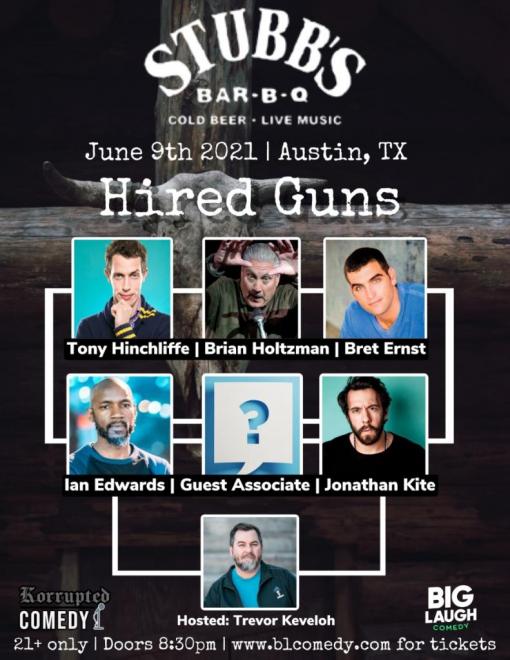