We all know the drill: kids love pizza.

Just about every human on earth loves pizza. Pizza is as universal as loving Dolly Parton. When someone says they're not a fan – that's an atomic red flag.

Jolene and a street slice are part of the American identity, no matter your zip code. Crispy pepperoni cups and melty cheese are things of beauty.

Thanks to being raised by the Ninja Turtles, the Noid, Pizza Hut Book-It campaigns, there are now adults in pizza printed-Hawaiian shirts, along with bed sheets decorated with happy slices.

The human pizza experience is so strong, I almost beat the brakes off a guy at a pizza place.

I grew up in Chicago, where you get real possessive about what pizza means culturally. We’re also a city that raises you not to take any shit, either. If there’s one town in America where coming to blows surrounded by the smell of italian sausage basting in it’s own juices while being oven fired, no one would shirk over it being The Windy City.

Pizza, like scraping, is a part of the lineage. I’m not saying there’s bare knuckle boxing on every street corner all over the south side, what I am saying is the lesson of being born not to let someone walk all over you, no matter what city you’re currently living in, holds steady.

Generally, pizza in Austin is a horror show. There are like three good places here. Italian food in general sucks acres of ass in this town. 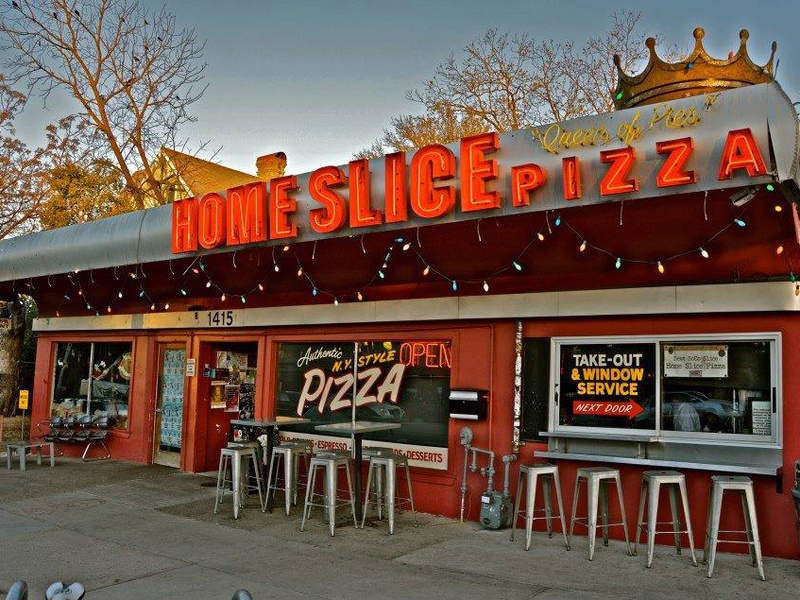 One of the better spots is Home Slice.

Home Slice opened a sit-down in the last few years that's a hip hop + punk rock inspired  joint with killer hot wings and an even better grandma pizza. Because I'm a single dad of two young hoodlums, I take my boys for a lot of pizza. I get tired of fighting about chicken nuggets, ramen, mac and cheese, and Burger King.

At Home Slice, the wait staff gives kids old balls of dough from the day before to play with. It keeps them occupied in between wiping boogers on one another or arguing about who farted.

Home Slice’s pizza is solid for the standard big, bar pies with massive slices. It’s not what I grew up eating, but it’s so much better than half of the shit people parade around this town as edible pizza, because friends, it ain’t.

And while we’re at it, there’s a truth that needs to be told: I hate to break your hearts, but deep-dish pizza is not what anyone from the Chicago area eats on the reg. Instead, deep-dish is a once-a-year food for a special occasion, kinda like that special gross thing your partner will do on your birthday, or pizza Christmas, whatever your saucy metaphor.

I blame the obsession with deep-dish on countless terrible Travel Channel shows before they switched formats from food and adventure to bros in Affliction gear yelling “what happened to you?!” to invisible specters in old movie theaters.

On one of our Home Slice trips, we sat down, the boys colored, played with the dough, and we got through the pizza. I didn't have to raise my voice about Jackson burping in his younger brother Luke's face.

Walking outside, my kids immediately noticed a play area in the back of the restaurant on the patio. It's an AstroTurf berm, nothing crazy. The two of them rip off their shoes and make a B-line for the other howling children.

Naturally, I'm standing there with other parents, holding our leftover pizza box like a total dipshit. The last thing I want to do is make small talk with a dad in khaki shorts who's sipping on a craft beer. Not today, not tomorrow, not ever.

I keep my focus tight on my kids because I could feel a broham with a forearm skull tattoo he got on a class trip to Colorado back in 2010, wanting to chat about my sleeves. I'm all for conversation, but Jesus, that's one topic I do not wish to engage in, ever.

Like the deep dish pizza, reality tv gave middle America the impression that every tattoo has a story. Jokes on them, give me enough Jameson, and I'll get your mom's name tattooed on my ass for a plate of carne asada tacos.

Standing at the berm, playing the "how short is too short, but how long is too long" game in my head to be a cool parent, but not stand here much longer like a doofus, I noticed something: a kid was being an asshole to Jackson.

Here's the thing, Jackson doesn't have a mean bone in his body. The boy is a golden retriever in human form. He loves everyone, says hello, tells you his life story, and whatever you're doing, he wants to join you with 100% conviction.

When I see a kid probably two years older than him yelling to the pack of wolves following, "we don't like you! Go away!" And not like in a bit of a kid "semi-asshole, semi-innocent" way, but being a total DICK, I had to act.

My little dude comes over, broken-hearted - he was around six, I think. His brother, Luke, was around three at the time, so he was oblivious. Jackson shrugged his shoulders, "he didn't want me to play with them," meanwhile, this jerk is yelling, still, at me, that he didn't want Jackson to play.

What parent lets their kid talk that way? Assholes.

I’m no perfect dad. I fuck things up all of the time. Like, all-of-the-time. I let them stay up late, eat a lot of snacks. Act like little monsters - only to one another, not to others around them.

One time, I pushed Jackson too hard on the swing and he was wearing those slidy Adidas workout pants and he flew off, face first into the wood chips. I felt really bad for him, but it was funny how fast he flew out of the seat.

Last night, I had to yell at Luke for peeing on his brother. Again, it’s hard to hold in a deep laugh, trying to explain “we don’t pee on one another” when we all know that’s certainly not true depending on what you like to watch on the internet.

I figured out who this little shithead’s mom and dad were. Mom was buried in her iPhone, zero fucks, and dad was watching but was too busy itching out of his green polo once he saw the fire of a thousand suns in my eyes.

Standing there, holding cold slices of cheese pizza, I hollered, in front of strangers letting their kids play, "hey! You be nice! He just wants to play with you! And if you don't be nice, I'll beat up your fucking dad!"

The dad looked at me, serious as a heart attack. Immediately, he yelled back to his spawn, "Be nice to that little boy! He just wants to be your friend!"

My man was lucky he had common sense. I was ready to go Stone Cold Steve Austin, throwing my pizza box to the heavens, and ready for absolute violence. The slices remained intact.

My boys played a few more minutes, the mean kid and his dad both silently understanding they dodged a serious psychotic papa bear violent breakdown, kept their nervous eyes on me while the other parents made the cringe face, glad they weren't privy to a scene straight out of COPS.

When we got home, the kids munched on a slice of cold pizza each. We talked about what happened, and that beating someone up is never the answer.

But that slice of cheese tastes a smidge better when you freak out a whole patio of upper-middle-class parents and don't have to make small talk on a summer day.